Thusfar we have discussed the importance of proper trigger selection as it relates to optimizing our AR-platform rifles for hunting-specific applications.  While I would argue trigger selection is the most important aspect of the optimization of these types of weapon systems, there are several other areas worthy of consideration.

Remember, we are specifically speaking to the modern sporting rifle and its use in hunting applications. Rifles optimized for personal defense, competition, and combat bear some different needs protocols.

The second component of the hunting AR which (at least for me) warrants scrutiny is the barrel.

When speaking of barrels, I try to look at the issue from an end use standpoint.  That is, what do I want out of the barrel?  What are the metrics by which the barrel will be judged and/or selected?  Given we are speaking of using the rifle primarily for hunting applications, the two facets of barrel selection to which I pay the most attention are accuracy and balance.  While accuracy is a pretty plainly obvious metric, my personal definition of balance includes several variables inclusive of barrel length and contour.  These, in turn, effect how much the barrel (and the applicable rifle) weighs and (sometimes more importantly) "where" the weight lives.  More on that shortly.

As far as accuracy is concerned, I generally look at it like this:  Pick a consistently reliable material and then select a barrel made from same from a reputable, proven manufacturer.

My preference in barrel steel is 416R stainless steel.  Mind you, the purpose of this blog (both for brevity and to avoid bottoming out the depth of the blogger's knowledge) is not to argue the specific metalurgical pros and cons of every barrel material available.  Simply, I select 416R for myriad reasons which relate directly to the barrel's end use as a component of a hunting weapon system.  416R, as a stainless steel, is more resistant to rust and corrosion than other non-stainless metals.  While some stainless steels (416 specifically) can, theoretically, be "brittle" when exposed to sub-freezing temps, 416R maintains a safe use threshhold down to approximately -40 degrees F.

While the two above listed metrics are definitely worthwhile to consider when selecting a barrel for a hunting rifle, I have to be honest with the reader: They are secondary to me.  First and foremost, I value accuracy.  Extreme accuracy.  Like itty-bitty bug hole groups at 100 yards accuracy.  I will admit there are a ton of quality rifles on the market that will shoot a "minute-of-animal".  And realistically, that may be truly all that is needed.  But for me, I need a rifle that will print small groups consistently.  Otherwise the rifle begins to bore me.

I have had very good experiences with barrels manufacturered by quality builders using 416R stainless steel.  I've yet to have one that wouldn't shoot adequately and, thus, I continue to use them. Are there other companies making amazing barrels?  You bet. We plan on adding them to our inventory soon.  And would I necessarily use 416R as my primary choice for a tactical or personal defense weapon system?  Maybe.  Maybe not.   And to be fair, I've shot a fair number of chrome-lined chro-mo barrels that shot VERY well.  Again, I'm not disparaging other barrel materials.  I'm just telling you what I've used with consistent and desirable results.

As far as barrel makers are concerned, shooters (and specifically hunters) are pretty blessed with the shape of the industry right now.   There are several makers putting out very high quality stainless AR barrels presently.  We carry stainless barrels from Seekins Precision presently.  We will be adding Ballistic Advantage in the near future as well.  I've used barrels from Wilson Combat and Noveske Rifleworks as well with great results. Running a Google search for "stainless steel AR rifle barrels" will bring up hours and hours of reading and research allowing you to kill an inordinate amount of free time.

The other area of my focus when selecting a barrel for a hunting AR is balance.  Now, here is where my opinion becomes very subjective.  I personally like a weapon system which "points" well from every shooting position I use.  I try to avoid putting too much weight forward of my support hand and I try to keep the overall weight down.  We are, after all, talking about hunting rifles, the presumption being these are weapon systems that you will pack around, possibly for extended periods of time and have to shoot from "field" positions.  I love laying behind a fifteen pound gun complete with front and rear bags to hammer targets in the next zip code probably better than most, but this post is more focused on those of us who get out of the truck and away from the road occasionally to chase game.  Heavy rifles are, well, heavy.   And with each step, they have the tendency to become heavier and heavier.  It defies the laws of physics.  And yet, it still is.

So, my formula for barrel selection as it relates to balance is derived from a simple relationship between length and contour. Simply, the longer I go on the barrel, the lighter I like the contour to be.  If the cartridge requires a twenty-two or twenty-four inch barrels to squeeze out those last few feet per second measurements, I'll try to keep the overall barrel contour (and especially the muzzle diameter) down to a fairly scant measurement.  I don't mind too much having a little meat on the first handful of inches of barrel (the part forward of the barrel extension).  But I try to avoid allowing the contour to carry forward past my support hand.  I find it tends to make the weapon muzzle heavy and effects the manner in which it "points" or "tracks" game, especially when fired from the standing, kneeling, and seated field positions.

Conversely, if the cartridge of choice allows for a shorter barrel (specifically .300 AAC BlackOut, but also sometimes .223 Remington / 5.56x45mm) in the 14.5" to 18" range, I'll allow for a little heavier contour, both overall and specifically on the muzzle end of the barrel.  For me, I find this allows the weapon to track and balance well.  Again, for me, it also mitigates excessive movement caused by the shooter or the environment, helping to "settle" the weapon down during positional shooting.

So. . .what am I running on my personal, go-to hunting AR (built by Elkhorn Trail Rifles, I don't mind saying)?  My hunting AR currently wears a Ballistic Advantage Premium Barrel chambered in .223 Wylde in their BA Hanson contour.  It is eighteen inches in overall length with a shoulderless gas block area.  It has a 1-in-8" twist, which I've found groups my 64gr GoldDot SP rounds tightly.  The lighter contour carries and balances well.  I've used this particular rifle on deer, hogs, coyote, and javelina with great success. 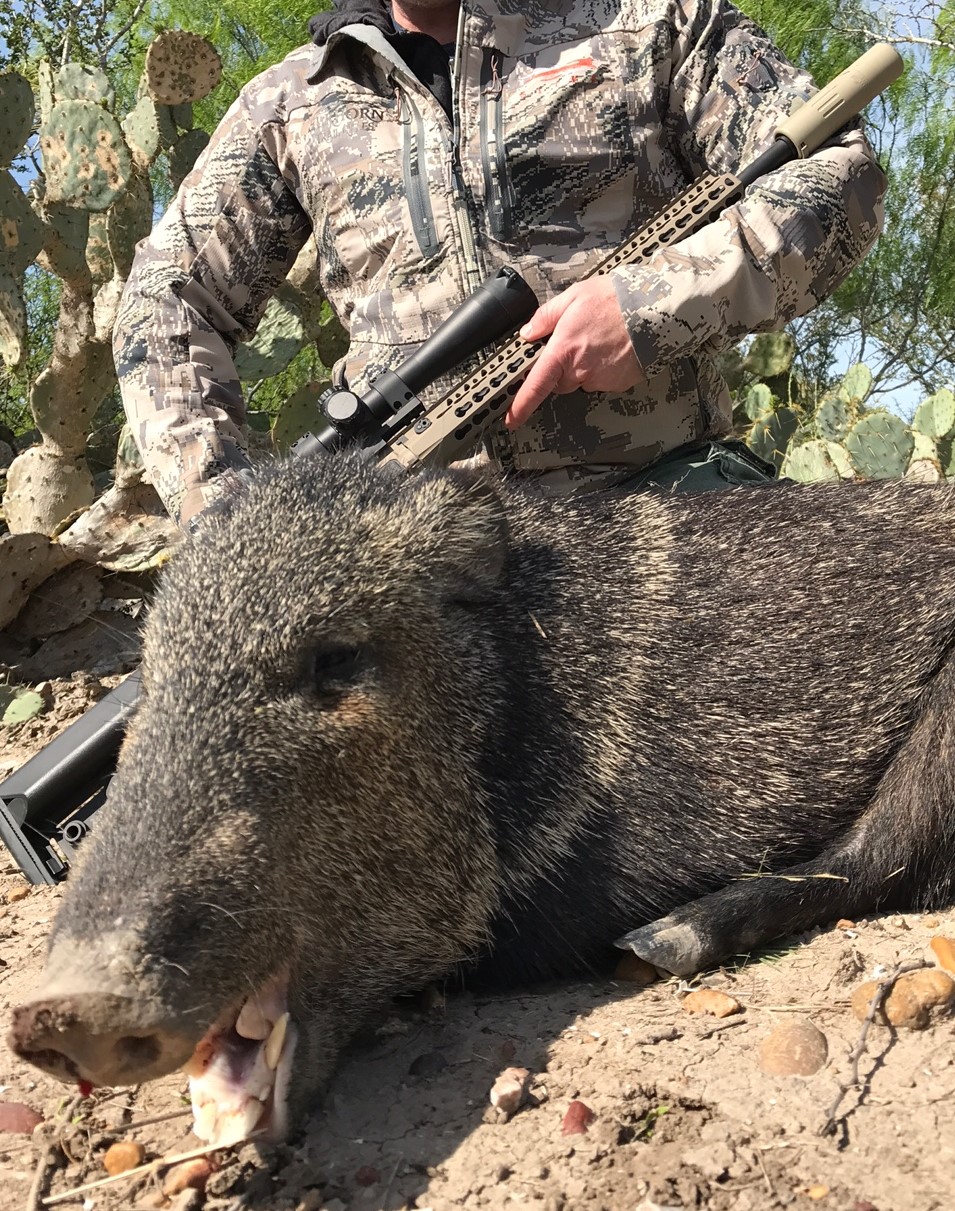 I have a few more ideas and preferences on AR components specific to hunting rifles.  More posts to follow!

Check Out Our Sister Company

Our website uses cookies to make your browsing experience better. By using our site you agree to our use of cookies. Learn More I Agree
× What Are Cookies As is common practice with almost all professional websites this site uses cookies, which are tiny files that are downloaded to your computer, to improve your experience. This page describes what information they gather, how we use it and why we sometimes need to store these cookies. We will also share how you can prevent these cookies from being stored however this may downgrade or 'break' certain elements of the sites functionality. For more general information on cookies see the Wikipedia article on HTTP Cookies. How We Use Cookies We use cookies for a variety of reasons detailed below. Unfortunately in most cases there are no industry standard options for disabling cookies without completely disabling the functionality and features they add to this site. It is recommended that you leave on all cookies if you are not sure whether you need them or not in case they are used to provide a service that you use. Disabling Cookies You can prevent the setting of cookies by adjusting the settings on your browser (see your browser Help for how to do this). Be aware that disabling cookies will affect the functionality of this and many other websites that you visit. Disabling cookies will usually result in also disabling certain functionality and features of the this site. Therefore it is recommended that you do not disable cookies. The Cookies We Set
Account related cookies If you create an account with us then we will use cookies for the management of the signup process and general administration. These cookies will usually be deleted when you log out however in some cases they may remain afterwards to remember your site preferences when logged out. Login related cookies We use cookies when you are logged in so that we can remember this fact. This prevents you from having to log in every single time you visit a new page. These cookies are typically removed or cleared when you log out to ensure that you can only access restricted features and areas when logged in. Form related cookies When you submit data to through a form such as those found on contact pages or comment forms cookies may be set to remember your user details for future correspondence. Site preference cookies In order to provide you with a great experience on this site we provide the functionality to set your preferences for how this site runs when you use it. In order to remember your preferences we need to set cookies so that this information can be called whenever you interact with a page is affected by your preferences.
Third Party Cookies In some special cases we also use cookies provided by trusted third parties. The following section details which third party cookies you might encounter through this site.
This site uses Google Analytics which is one of the most widespread and trusted analytics solution on the web for helping us to understand how you use the site and ways that we can improve your experience. These cookies may track things such as how long you spend on the site and the pages that you visit so we can continue to produce engaging content. For more information on Google Analytics cookies, see the official Google Analytics page. We also use social media buttons and/or plugins on this site that allow you to connect with social network in various ways. For these to work, the social networks may set cookies through our site which may be used to enhance your profile on their site, or contribute to other purposes outlined in their respective privacy policies.