In the first of this series, I discussed the utility of the modern sporting rifle (specifically rifles built on the AR platform) as it relates to hunting.  I also mentioned there were several areas of consideration I believed were important in ensuring the MSR we use is optimized for the task.  The first of these (and perhaps the most important) is triggers.

The trigger is, to my mind, the most important component of the rifle when we are speaking of how we, as shooters, "integrate" ourselves to the weapon system. I'm not speaking strictly in terms of accuracy, though a great trigger will often enhance this metric. More so, the trigger is the vehicle by which we impart the "when" of the shot.  The more repeatable the pull, both in terms of weight and consistency, the more predictable the shot.  And as we know, the key to accuracy, both relating to the rifle and shooter, is the removal of variables.  Or more simply, doing everything exactly the same every time.

So, how do we select a trigger for our hunting AR?

Triggers come in two primary "flavors": single-stage and two-stage.  Without getting into the specifics of each, the key difference is the movement of the trigger.  In a single-stage trigger, the first "movement" of the trigger initiates the release of the hammer.  In a two-stage set up, you have some "take up" on the trigger before hitting what I refer to as the trigger wall.  Then, additional pressure on the trigger initiates another heavier pull, resulting in the release of the hammer.  I know there is a ton of technical jargon I could use to explain each system. . .but I'm a simple man and I suspect you'd rather the layman's explanation.

While there are several great companies out there making high quality single-stage triggers, I don't favor them for hunting applications.  Actually, I don't favor them on any guns designed for any application NOT solely involving punching paper.  I like the forgiveness of a two-stage trigger as it relates to all of the variables one might encounter during hunting, tactical operations, or competition. The first of the two stages of the trigger (the easy first pull) is a bit more forgiving if the shooter is adrenalized, wearing gloves, has a numb or stiff trigger finger (due to the cold), or any of the other myriad variables present in these types of scenarios. The weapon is less likely to surprise the shooter (in a bad way) with a shot earlier than expected.  Now, I'll readily admit there are a ton of shooters out there who put in a ton of time on their single-stage weapon systems.  I'm sure I'll get heated replies questioning my familial heritage, sexual orientation, and toilet paper preference.  As I've said, these blogs are a collection of my opinion.   So if you disagree, good.  And also, tough.

Trigger pull, to me, is a less important metric of a great trigger than how "cleanly" the trigger pulls.  I'm talking about creep.  I'll take a heavier trigger with a Vaseline-on-glass smoothness of pull long before I'll accept one that is under two pounds but feels like I'm dragging my five year old son by his hair over gravel.  By the way, I wouldn't do that. . .so please don't call Child & Protective Services.  I'm waxing eloquent.  Give me a break.

So, I guess the logical question is this:  What trigger(s) do I recommend for hunting AR's?

Personally, I run the Geissele Super Dynamic - Enhanced (SD-E) on my personal and shop hunting AR's. 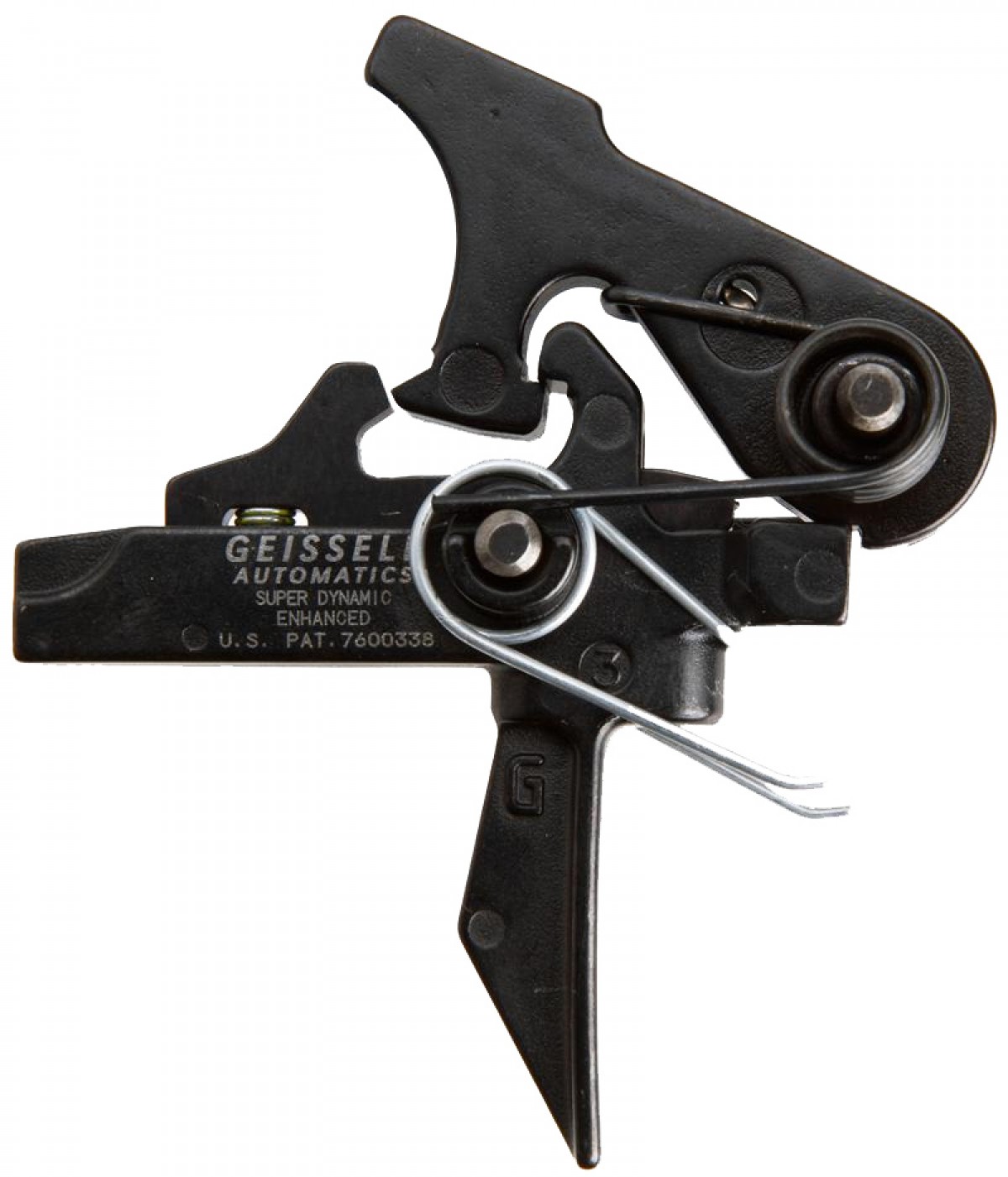 It has a first stage pull weight of 2.3 pounds and a second stage weight of 1.3 pounds.  The flat bow of the trigger imparts more control (I believe).  The whole set up drops directly in to any mil-spec AR rifle (both AR-15 and the larger format AR-10).

Geissele also offers the same type of trigger with a curved bow (the Super Semi-Automatic Enhanced or SSA-E) if you are hung up on running a flat trigger.  Either way, Geissele has been my go-to trigger brand for years.

Check Out Our Sister Company

Our website uses cookies to make your browsing experience better. By using our site you agree to our use of cookies. Learn More I Agree
× What Are Cookies As is common practice with almost all professional websites this site uses cookies, which are tiny files that are downloaded to your computer, to improve your experience. This page describes what information they gather, how we use it and why we sometimes need to store these cookies. We will also share how you can prevent these cookies from being stored however this may downgrade or 'break' certain elements of the sites functionality. For more general information on cookies see the Wikipedia article on HTTP Cookies. How We Use Cookies We use cookies for a variety of reasons detailed below. Unfortunately in most cases there are no industry standard options for disabling cookies without completely disabling the functionality and features they add to this site. It is recommended that you leave on all cookies if you are not sure whether you need them or not in case they are used to provide a service that you use. Disabling Cookies You can prevent the setting of cookies by adjusting the settings on your browser (see your browser Help for how to do this). Be aware that disabling cookies will affect the functionality of this and many other websites that you visit. Disabling cookies will usually result in also disabling certain functionality and features of the this site. Therefore it is recommended that you do not disable cookies. The Cookies We Set
Account related cookies If you create an account with us then we will use cookies for the management of the signup process and general administration. These cookies will usually be deleted when you log out however in some cases they may remain afterwards to remember your site preferences when logged out. Login related cookies We use cookies when you are logged in so that we can remember this fact. This prevents you from having to log in every single time you visit a new page. These cookies are typically removed or cleared when you log out to ensure that you can only access restricted features and areas when logged in. Form related cookies When you submit data to through a form such as those found on contact pages or comment forms cookies may be set to remember your user details for future correspondence. Site preference cookies In order to provide you with a great experience on this site we provide the functionality to set your preferences for how this site runs when you use it. In order to remember your preferences we need to set cookies so that this information can be called whenever you interact with a page is affected by your preferences.
Third Party Cookies In some special cases we also use cookies provided by trusted third parties. The following section details which third party cookies you might encounter through this site.
This site uses Google Analytics which is one of the most widespread and trusted analytics solution on the web for helping us to understand how you use the site and ways that we can improve your experience. These cookies may track things such as how long you spend on the site and the pages that you visit so we can continue to produce engaging content. For more information on Google Analytics cookies, see the official Google Analytics page. We also use social media buttons and/or plugins on this site that allow you to connect with social network in various ways. For these to work, the social networks may set cookies through our site which may be used to enhance your profile on their site, or contribute to other purposes outlined in their respective privacy policies.